The China Wine List of the Year Awards are now across China!

Today, through China’s Wine List of the Year Awards, many of the world’s and China’s leading experts now come together each year to seek out and recognize and reward China’s best wine and beverage lists!

Established in 1994 by Tucker Seabrook (established 1838), the Wine List of the Year Awards were introduced to recognise and reward the enormous investment in time, skill and resources that go into developing the best quality wine and beverage lists by country. Launched in China in 2012, the mission of China’s Wine List of the Year Awards is to seek out, assess, recognise and reward the best Wine and Beverage Lists of China’s finest restaurants, hotels, cafes, brasseries and bistros, pubs, wine bars and clubs – large and small.

Now one of the most anticipated events on China’s Hospitality and Tourism industry’s annual calendar, these prestigious awards have contributed significantly to the lifting of the standard of the nation’s Wine and Beverage Lists whilst at the same time recognising and rewarding the talents of many of the nation’s best Sommeliers and the venue Owners, F&B Directors, Managers who support them. In addition, the Awards have also been influential in raising the public’s interest in fine wine generally, and have improved the consumers appreciation of the participating establishments.

With over 30 different Awards to be won, and Reviews written for every Award and Glass winner, greater China’s best wine and beverage lists will be recognised, rewarded and promoted as the standard of excellence that other establishments aspire to. China’s ever-increasing, enthusiastic food and wine public will also be able to use the reviews and results to explore new establishments with confidence.

A panel comprised of some of the world’s most respected International and Chinese experts in Wine, Wine Service, and Wine Commentary are the Judges of China’s Wine Lists. They include Master Sommeliers, including the Founder of the Court of Master Sommeliers Worldwide, a previous Best Sommelier in Asia-Oceania, advisors to the China Sommelier Association – Preparation Committee, plus Masters of Wine and Wine Commentators from some of the most respected publications both in China and around the World. It is these International and Chinese voices of wine authority that will oversee the final selection of China’s finest lists and guarantee their recognition on the world stage.

Today also, the participants in the Awards include representation from virtually all of China’s major International Hotel and Resort Groups, together with many outstanding, prestigious independent stand-alone Restaurants, Clubs and Wine Bars. 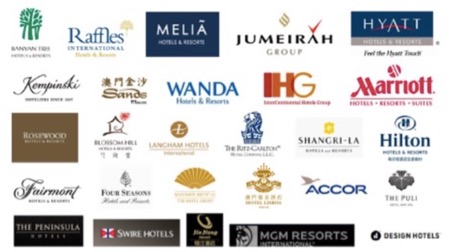 Great wine lists are not possible without an outstanding commitment from the Owners, Food & Beverage Directors, Wine Managers, behind those lists and the Wine Cellars that support them. These are those dedicated individuals / organisations who recognise the needs of their ever more discerning consumer customers – in the quality of the wine and beverages served and the way they are served. This is a need they wish to satisfy and they also recognise the opportunity to gain an edge over their competition with a celebrated great Wine and Beverage List – on top of their already outstanding Food and Service offer.

In recognition of the vital role they play in committing to and investing in the very best Wine Lists – and the Wine Team and the Cellars behind them, a new Award has been announced – “China’s Outstanding Owner, F&B Director, Wine Manager” Award. This Award will be won by the nominated – Owner or F&B Director or Wine Manager, responsible for the two winning lists from – Mainland China and Hong Kong, Macau and Taiwan.

China’s Wine List of the Year Awards honour China’s exceptional sommeliers, who with professional acumen, dedication and talent have created truly remarkable wine and beverage lists. These awards inspire wine service professionals to improve their knowledge and standards, thus raising the bar on the level of service that all sommeliers provide to their ever-more discerning consumers.

To recognise and reward their wonderful contribution, China’s Wine List of the Year Awards has an award each year – China’s Outstanding Sommelier of the Year – for the Sommelier responsible for the winning List – firstly in Mainland China and secondly in HK, Macau, Taiwan.

Ultimately the customers also develop a greater enjoyment and appreciation of wine and the dining experience and China’s food, beverage and hospitality industries benefit as a whole.  In addition, today tourism is one of China’s fastest growing and most important industries and the future growth of both the tourism and the hospitality industries – one of the largest employers in the country, can be significantly influenced by the calibre and individuality of China’s dining establishments. Distinctive and quality wine and beverage lists can play a large role in helping to achieve this.

GEOGRAPHY OF THE AWARDS

The awards have been invaluable in recognising and rewarding the nation’s finest wine lists whilst building rapport and brand loyalty between supporting producers, wineries, importers, and distributors, their on-trade marketplace and premium consumers. They have also helped dedicated sommeliers build their reputations and gain the respect and trust of the country’s best and most awarded wine professionals, wine and wine service judges, media, stakeholders, and their discerning consumers.

2014 saw more than a doubling of Entrants in the Awards and also in Glass Award winners in this, only the second year of the Awards, with the final list of Award Winners reading like a Who’s Who of fine ‘wining and dining’ across China.

2015 was another extraordinary year of growth for the Awards seeing the number of Glass winners in this year’s China’s Wine List of the Year Awards increase by 52% in total on 2014, with the number of 3 Glass Awards – the highest level possible, up by an outstanding 58%!

2016 was yet another record year for China’s Wine List of the Year Awards with again a record number of entrants in the Awards and a record also in the number of Glasses awarded.

The big winners again in 2017 with China’s Wine List of the Year Awards were China’s Hospitality and Tourism Industries and China’s discerning Consumer across the entire country. Every year the standard of the Lists representing those industries and available to those consumers continues to rise. By 2017 the average Glass score awarded across China is a record 1.6 Glasses per entry with 2 and 3 Glass winners now account for almost 50% of all entries!

Another wine web media organisation PINOR, participated in the Awards in 2018 and 2019 with 1100 catering organizations nationwide participating in China’s Wine List of the Year Awards, covering Hong Kong, Macau, Taiwan and over 60 provinces and municipalities across Mainland China.

Again in 2020 the big winners with China’s Wine List of the Year Awards are China’s Hospitality and Tourism Industries and China’s ever more discerning Consumers everywhere who benefit from the significant gains that are being achieved each year with the standard of China’s wine lists.

Every year the standard of the wine lists that showcase these industries – and are available to those consumers, continues to rise with the highest percentage ever of 3 Glass Wine Lists – the highest level, across China!

In 2020 the most popular categories entered by applicants were again Best Wine by the Glass List followed again also by Best Food and Wine Matching Wine List. For the first time this year the Best Listing of Chinese Wines was the next most strongly supported category which is a great trend for China’s growing Domestic Wine Industry!

2020 was also another record year for the Independent Restaurant sector across China reflecting the increased focus by this category on creating outstanding wine offers for their customers and wanting to say so!

With the 2021 China’s Wine List of the Year Awards – to quote from the International Chairman of Judges Brian Julyan MS – Founder of the Court of Master Sommeliers …” Congratulations to all the entrants and especially the finalists for another year of outstanding entries.  With Restaurants suffering reduced business through the pandemic one might have expected lists to be reduced in range and diversity, but this was not the case.  The attention to detail and the quality of content was as good as any previous year.  The array of WBG, aided by the excellent dispensing systems now available, has allowed considerable expansion of this section, providing Sommeliers the chance to offer exciting food and wine pairings course by course and customers an enhanced opportunity to enjoy a wider range of wines …“There hasn’t been a year when the quality of China’s wine lists was so strong. It seems that, in 2021, instead of increasing the size of their lists, sommeliers are looking to improving the quality of the wines they offer their customers. The best restaurants (both those which are in hotels and are stand-alone) are offering more extensive lists by the glass that are thoughtfully selected to be in tune with the restaurant’s theme or cuisine and offer patrons unforgettable experiences.

Finally, it is very encouraging to hear of the positive impact on respective businesses that success in the Awards is bringing to those deserving of recognition and reward for the outstanding levels they are achieving.

The highly anticipated results of the 2022 China’s Wine List of the Year Awards were announced on 14th November 2022, to an audience of China’s leading sommeliers, VIP’s, Award Partners and Supporters, Wine judges from around the world, government representatives and media with a live broadcast of the Award Results. Jing Yaa Tang (Chaoyang District, Beijing), won the Mainland China Major Award and The Manor (Cotai, Macau) was named China’s Wine List of the Year from Hong Kong, Macau and Taiwan.

Explore the latest news and updates for the awards, events and industry specific news. Contact us at awards@winelistoftheyear.com.

2022 China's Wine List of the Year Awards are now open!

2021 China's Wine List of the Year Awards are now open!

Subscribe to our mailing list to keep up to date with the latest news and announcements for the Awards
We would love to hear from you!
Back To Top